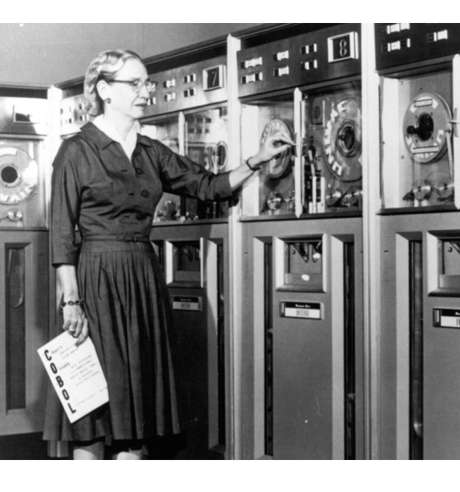 To celebrate International Women’s Day, we wanted to share a little about a woman who was a trailblazer in the technology field. Grace Hopper was a computer scientist. She held a Ph. D. in mathematics from Yale University, was a Naval Rear Admiral, and a pioneer in computer language. Grace Hopper’s most notable accomplishment was creating the first compiler for a computer language which lead to the development of COBOL. She also created standards to test computer systems against.

Before her military career, she was a mathematics professor at Vasser, beginning in 1931. When World War II broke out, Grace tried to enlist in the Navy but was denied because she was 34, which was too old, and also 15 pounds below the Navy minimum weight. She went to the Naval Reserves, graduated first in her Mindshipmen’s class of 1944, and went on to serve on the Mark 1 computer staff at Harvard.  She continued to serve in the Navy reserves, even turning down a full professorship at Vasser to continue on her Navy contract work at Harvard. She did not fully retire from the Navy until 1972. At the time of her retirement, she was an admiral.

Grace’s success was hard-fought. When she first created her compiler, she was told computers could only do arthritic, not programs.  She believed all of the information we have needed to be processed. And she was right. Today we base many of our business decisions on the data collected and interpreted through Business Intelligence.

Grace Hopper is an inspiration to women everywhere, especially in the field of computer science.  Her tenacity and brilliant mind changed our world and made the workstation, laptop, tablet, or smartphone you are reading this on possible. Happy International Women’s Day, Grace, and all of you other trailblazers out there.